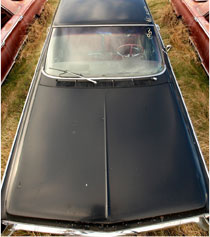 I started in the plumbing trade in 1971 as a helper. I dug ditches and picked at the rock the backhoe wouldn't dig in order to reach the depth needed for proper drainage of the new sewer lines. It took me two to three months before I began to understand what I was doing. I once asked my boss how long will I be a helper and he told me when I could install the plumbing in a simple one bath residence alone without supervision and pass inspection. After six months my opportunity presented itself. My boss also stated that he would give me a helper, a truck, and raise my wages. I installed the plumbing in the one bath resiidence with one kitchen and one laundry. The house also passed inspection. Two weeks later I was in the new truck with one younger helper. Six months more and I had two helpers and have been going strong for a long time.
I have two sons and have taught both of them. My older son, Jason works for a larger plumbing company for the benefits and to "Get away from Dad!" My younger son, Adam has worked with me for the last four years and feels like he's captive! His truck is almost ready and I am sure if you ask him that he will tell you that "it can't happen soon enough."
I learned my trade on the west coast in California where all the codes were strictly enforced. After leaving my original job of three and a half years I worked for one general contractor for four years and was his plumber. He built 52 houses a year start to finish. I was very busy and also doing custom two-story homes for other owners/builders. We had no basements in Southern California, they were slab homes with city sewer.
My dream home was 4200 sq. ft slab ranch which I still have the complete set of plans. When I win the powerball someday, I'll have my dream. I treat people fair and I always get a good night's sleep for I know I do good, honest work.
The next time you take a bath just remember that the bathtub (cast iron) weights nearly 390 pounds and was carried upstairs and installed by a plumber. Enjoy your tub bath March 15, 2005

4/29/2010 I have been working with my Dad now since 2001, and I definitely enjoy working as a Father/Son combination rather than working for someone else. I like helping my Dad in the best way I can and try to do the job to the best of my ability and to work for customers in the same manner as I would work in my own house. Since the economy has been having problems for a number of years, there really hasn't been enough work for me to go out on my own so we both still work together. Our customers enjoy our company a lot of times and there's always a story or two to tell after we're done with the job. As time has progressed I have done more and more of the work and have gained a lot of experience in these past ten years. We look forward to strengthening this business as much as possible and to continue providing punctual and friendly service for a reasonable price.